The idea  of a lost Eden is a commonplace in myth and literature – think Le Grand Meaulness. How compelling is the idea of a perfect place to be discovered or rediscovered – and to be expelled from. Masaccio’s painting in the Brancacci chapel captures the idea only too well. Adam and Eve look spectacularly miserable. Not one blade of grass to be seen!

And of course the place they were expelled from was a garden! Another mythical  – but very real – place was The Secret Garden where Frances Hodgson Burnett managed to weave every single heart-tugging  strand together: the grumpy child, the bereft husband, the huge old manor house,the mysterious cries in the night, the local boy in touch with nature – all heading towards healing. Needless to say, like a very large number of other girls, I was madly in love with Dickon. How could I not be?

When I was a child – my very own lost Eden – I lived in a place very rich in history. I grew up in what had once been a gamekeeper’s cottage on a huge estate in Essex. The Petre family, hugely wealthy in the 16th, 17th and 18th centuries – despite remaining Roman Catholic – had built Thorndon Hall, a magnificent pile designed by Thomas Paine. Building began 1764. 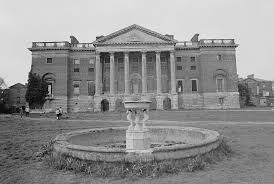 By the 1950s, after several disastrous fires, the house had been abandoned and only the shell remained in various states of decrepitude. As children we were warned never to go in it. So, needless to say, we went into all the bits of it that we were able to.

In the woods there were reputed to be mysterious trees rarely seen in England and planted by one of the lords who was a ‘famous botanist’. Then there  was the myth of the First Thorndon Hall which had entirely vanished and had been some mile and a half to the south. All this was rather hazy and ill-defined, and though we did a lot of exploring – as one did before the internet and the constant monitoring of children’s whereabouts  -we never did find the old hall.

So, many years later, researching a story for children, I came upon a most fascinating person, Robert the 8th Lord Petre, who died shortly after his 29th birthday, leaving his heir a baby only three months old.

Twenty years after Robert’s death all remained was a scene of desolation: the house was falling down having been partially burned by a fire caused by lightning in 1757, the nurseries were overgrown and the stoves empty, apart from two date palms, a cactus and a few sickly shrubs. Even the menagerie had vanished.

Robert’s son, who had not known his father, had the new grandiose Thorndon Hall built and the old one was almost entirely obliterated and forgotten. Only two images of the Elizabeth building exist.

I cannot discover a single image of Robert himself who after his death was described thus: “He was a fine, tall, comely man. Handsome, had the presence of a Prince, but so happily mixt that Love and Au was begat at the same time. The endowments of his mind are not to be described. Few excelled him in the liberal arts and sciences – a great Mechanic as well as a Mathematician, ready at figures and calculations, a fine taste for architecture, and drew and designed well himself” – a great Ardour for every Branch of Botanic Science, – whoever sees his vast Plantations and his Catalogue will not doubt it. In his Religious way an Example of great Piety, Charity and Chastity. Strict in his Morals, of great Temperance and Sobriety, no Loose Word, no Double entendre ever dropt from his lips”.

And now to write my story about how 20th century children rediscover this lost earthly paradise.

I wonder what passion drove Robert to create this fleeting marvel and why it was so utterly forgotten?

8 thoughts on “Writing about the Past and Mythical Gardens”